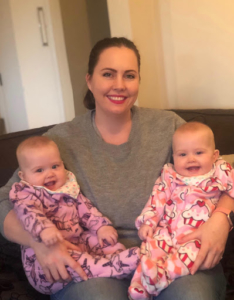 What Alisha had to say …

Caroline joined the Multiples Canterbury Committee at the end of June this year, and from the outset it was obvious she was going to be a huge asset to the team. Caroline is well organised and her creativity and eye for detail has been an immense help with the Multiples Canterbury brochure, and also the bi-monthly Multiples magazine for members (both of which were a little on the tired side).

Caroline has a can-do attitude, and friendly manner in all dealings with the club. She is not afraid of a challenge, and happy to help anyone that needs a hand. Caroline is engaging on social media, and has contributed to many member messages for advice, and also contributed to the Multiples NZ magazine earlier this year on her “Rural & Remote” story about living in Haast with her partner Scott and identical twins Arabella and Everleigh.

“Love it! We are lucky to have you on board”

“You have brightened it up and given it consistency, great work!”

Our club is so excited to have Caroline in the team, and with our planning meeting coming up in January, Caroline has already diving straight in with a list in mind of her next projects for 2021. Bring. It. On!

VOLUNTEER OF THE MONTH – WINNER NOVEMBER 2020