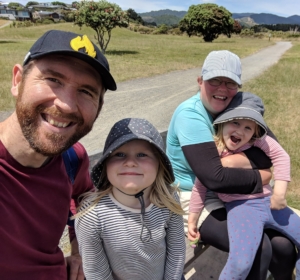 In the early days of Tara’s pregnancy, when we’d only told close family and were dodging questions from everyone else, I joked that it might be twins. You got pregnant so quickly, I said. She told me to shut up. I didn’t really believe it – approximately one in eighty pregnancies is multiples, or 1.25% if you prefer it that way, or 1000 per year in New Zealand – and we carried on with our lives as best we could, all the while getting to grips with the idea of being parents.

At the 12-week scan, the sonographer took my joke and made it very real. Two babies were indeed growing in Tara’s belly. We laughed, we cried, we freaked out. All of the literature about pregnancy, with its constant references to ‘baby’, singular, became irrelevant in a heartbeat. Or two heartbeats.

They grew to a combined 5.5 kilograms – or 12.1 pounds if you prefer it that way. It wasn’t easy for Tara. The pregnancy changed her body forever, stole her keratin, messed with her heart’s rhythm, and hard-rewired her brain. She reduced her tea consumption to one cup a day to manage her atrial fibrillation. She is the hero of this story, like most mothers of multiples.

Our children were born. Two girls. They cried, they ate, they slept (but not always when we wanted them to). We lost our minds in love and exhaustion. People who have struggled with one infant have asked us how we did it. The pat answer is always, we just did it; we didn’t know any different. Beneath that, though, is the help Tara and I had along the way – from nearby relatives and friends, from KapiMana Multiples and Multiples NZ, and most of all from each other. We did it together.

The kids are now four years old. They are the most interesting people I have ever met, endlessly fascinating, and a constant enigma. How well do I know them, really? I can identify some of their traits and interests, but as articulate as they are now, there’s no language for expressing who exactly they are. Or who anyone is.

What I do know is they are different. They were dichorionic-diamniotic in utero – that’s two placenta, two sacs – so they are best seen as siblings born at the same time (although with their bright blonde hair and blue eyes, people often struggle to tell them apart). One is more environment focused, the other more people focused. One loves to immerse herself in drawing, the other loves acting out elaborate imagined scenarios. I could go on – but again, these are just my observations from a fixed point in time, likely to be proven wrong at any moment.

As they grow, and we as parents learn how to listen to them, to connect with them, to foster what is unique (and explain why you should at least wear underpants outside the house), they are increasingly full participants in the project of their own raising. We ask them what they think, and they tell us. They’re in it together with us, too.

In time, they will be the heroes of their own stories, and we will have launched them in concentric circles – Tara and I in the closest layer, then our ever-present close family, their educators, our friends, our community, and so on. The outermost circle will be Multiples NZ, wrapping around multiples and their parents, advocating for us, doling out free nappies and onesies if required, always there when we need them.

The theme for Multiples Awareness Week 2022 is Stronger Together – Celebrating Diversity. I can confirm, from the narrow perspective of my own very Pākehā parenting journey, that we are so much stronger together. And just as my children are fundamentally different, every multiples story is unique and fascinating in its own way.

My hope is that all parents of multiples are able to tell their own story, at least for themselves, to give shape to the intensity of their experience. And if they are willing to share that story, I hope we can all listen, and learn, together.

Barnaby Haszard Morris is the editor of Multiples Aotearoa magazine. For inquiries or to share your story, email magazine@multiples.org.nz. 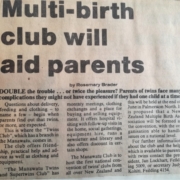