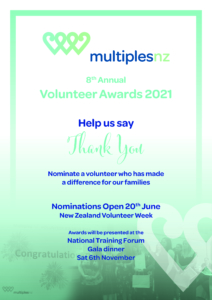 The purpose of these awards is to highlight the volunteer effort required to support families with multiples in New Zealand. The awards recognise individual achievement, while publicly acknowledging all voluntary effort. These awards are an opportunity for members, clubs and Multiples NZ to publicly express thanks to our volunteers.

All the information and nomination forms are available below.

EMERGING VOLUNTEER OF THE YEAR

Awarded to a volunteer who has stepped up and made a difference in their club or the New Zealand multiples community in their first 18 months as a volunteer (either on a committee or in a specific volunteer role e.g. starting a sub-branch, running a playgroup, being a contact person). The award highlights not only their contribution thus far, but their potential/intention to contribute to the multiple’s community in the future.

SUPPORT PERSON OF THE YEAR

Awarded to a volunteer who has provided exceptional service by supporting a family or families with multiples in the past year.

VOLUNTEER OF THE YEAR

betterment of families with multiples within their local area or nationally.

Awarded to a volunteer who has made an outstanding contribution to their club or the New Zealand multiples community for at least five years regardless of their role – from committee members to those people helping behind the scenes.

CLUB OF THE YEAR

Awarded to a Multiples NZ affiliated club that encompasses all or some of the following attributes:

Must be a financial member of Multiples NZ

Many volunteers could qualify in more than one category. However, the nomination of a person may be for only one category each year. It is acknowledged that many volunteers’ efforts are the result of several years of commitment and involvement, so a nomination may recognise the volunteer’s total contribution to the New Zealand multiples community, over the last few years.

Nomination forms are to be emailed to awards@multiples.org.nz with the subject line – Multiples NZ Award Nomination 2021.

An important aspect of ensuring your nomination has every chance of success is to make sure you complete each section thoroughly. Please provide all the information requested in detail.

The judging panel will consist of:

In the event that a large number of nominations are received, they will be reviewed by the Multiples NZ President and Vice President. Depending on the number received, nominations will be shortlisted to five finalists in each category and presented to the panel for final judging.

The judges’ decision is final and no other correspondence will be entered into.

The winners will be announced at the Multiples NZ Gala Dinner on Saturday 6th November in Christchurch.  Each winner of an award will receive a cash prize and a donation will be made to the winner’s local Multiples NZ affiliated Club.

Those category winners not in attendance on the night will be contacted following the announcement.

Multiples NZ will forever be grateful for the many hours that volunteers give to supporting families with twins and triplets and more throughout New Zealand.